Tucked away in a corner of Binjai Park is a Good Class Bungalow (GCB) designed by renowned architect Paul Tange, president of Tange Associates, for a friend. Tange is behind the design of buildings such as One Raffles Place, UOB Plaza and Orchard Gateway. 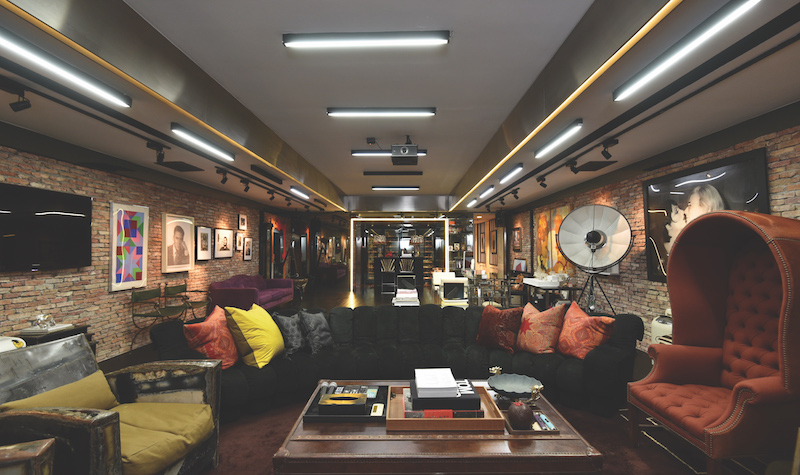 “The design of this house was a professional and personal undertaking for me as both an architect and close friend of the owner, for whom this was going to be the family home,” says Tange in an email response to EdgeProp Singapore.
His friend and owner of the 22,600 sq ft GCB had requested for the house to be spacious and to “comfortably accommodate social entertaining and a private family life”. This request inspired Tange to come up with what he calls “layered house” design that “increases privacy spatially” from the front to the back of the house.

To do this, Tange’s design features two double-storey buildings with a built-up area of 13,000 sq ft. The two buildings are connected by covered corridors. Both buildings were inspired by the concept of the Japanese gate, or mon, that can be found in traditional buildings and castles. In the first building, the public living room, meeting room and office are housed on the ground floor while the master bedroom spans the entire second floor.

Beyond this first building is a finely manicured courtyard where the family would occasionally hold dinner parties and gatherings. There is also a pavilion that Tange envisioned as a formal dining room but which the family now uses for various functions. This pavilion opens into the courtyard.
The GCB also features an entertainment room in the basement that the family has converted into a theatrette. Meanwhile, the property’s underground carpark can accommodate six to eight cars.

“These are the layers: entrance area and garden, first building, courtyard, second building, and family garden and pool,” explains Tange. “Over the years, this configuration, originally inspired by the need for the separation of public and private spaces, also proved to be very efficient, when it became necessary, in comfortably accommodating elderly parents and their caregivers.”

Another important design feature of the house are the terraces and terracotta-like vertical louvres. He says: “This is a very large house, so we felt it was important to convey a sense of a family home. The vertical louvres, placed along the white neoparies panels or crystallised glass ceramic, exterior, provide human-scale detail and warm colour, and, at the same time, shading and privacy.”

Tange highlights that “the juxtaposition of the grand framework of the buildings, or mons, against the fineness and the scale of the louvres” is the very essence of his layered house design. The design of the GCB took three months to conceptualise. Tange and his friend worked together for another six months to prepare the drawings for construction. In total, he estimates that it took a whole year to put the design together. The GCB was built from scratch and completed sometime between 2009 and 2010.

Since its completion, the owner and his family have been calling the “layered house” their home. However, as the family now shuttles between New York and Hong Kong, the GCB has been put up for sale by Sueann Lye, associate director of List Sotheby’s International Realty (SIR), the exclusive marketing agent. The owners declined to comment.

“The owners have been travelling in and out of Singapore in the past year, so they would rather sell the house to someone who can appreciate how Tange designed the GCB to cater to a family’s entertainment needs while maintaining privacy,” says Lye.

The GCB has a price tag of $37.3 million or approximately $1,650 psf.
Bruce Lye, co-founder and managing partner of SRI, says this asking price is in line with recent transactions. SRI recently sold a 22,012 sq ft GCB at Ridout Road for $25.68 million or $1,166 psf. According to him, demand for GCB remains supported by Singaporeans who are looking for a family home. He observes: “The market is very lively and we do get quite a few viewings that result in offers.” While market sentiment in 1H2019 may have weakened due to the uncertainties arising from macroeconomic factors such as the US-China trade war and Brexit, "ultra high-net-worth investors are still looking for high quality and unique investments", says Leong Boon Hoe, COO of List SIR. "GCB sales momentum could pick up in 2H2019 - the way it had improved dramatically in 2H2018". Regardless, Lye of SRI believes that the “layered house” designed by Tange could see good demand. “There are some buyers who are looking for older GCB plots so they can tear down the existing house and build their own according to their tastes. For this GCB, the fact that it is designed by Paul Tange could see it command a premium,” he says.